Much has been said and written about low-income urban communities in Latin America over the past century. And yet, each study has focused on its current times, and we continue to know little about these communities’ histories. In the case of Lima, the multiplicity of studies about barriadas and pueblos jóvenes (the two names used to name Peruvian shantytowns before and after 1968 respectively) during the 1970s and 1980s offers an excellent platform to start reconstructing, problematising and weaving their histories together.

As a Canning House and King’s College London Visiting Fellow I have been able to access the vast and excellent Canning House Library collection held at the Maughan Library, in both the Foyle Special Collections Library and on the open shelves, to start setting this background. More specifically, the fellowship has awarded me an incredibly productive and inspiring opportunity to lay the foundation for my new research project ‘”Who decides?”: the impact of Habitat I on the urban poor in Latin America’ on the history of Lima’s pueblos jóvenes after 1976 and through an extremely delicate period in Peru – the 1980s. Building on from my previous ten years’ experience studying Buenos Aires, a strikingly different case, the books I found at the Maughan Library allowed me to explore the richness of Lima as a case for the study of urban informality.

Peru was the first country in Hispanic America where the state recognised residents’ rights to land tenancy (first case by case during the dictatorship of Manuel Odría in the 1940s, and later by law during the government of Manuel Prado in 1961), and also where it systematically assisted residents for self-construction. In fact, Peru was a crucial testing ground for aided self-help, a system where governments provide residents with land for them to build their own housing, and for incremental housingthrough its high profile ‘Experimental Housing Project’ or PrEVi.

Not least, it became famous for Juan Velasco Alvarado’s celebration of self-built communities as ‘an alternative model of development’ (1968-75). Most crucially, however, residents themselves self-organised at a scale and pace that overshadowed contemporaneous grassroots initiatives in Latin America. This took place in a hemispheric context where the prevailing state perspective was largely that of eradication. The uniqueness of Peru attracted international attention at its time, not least that of English architect John FC Turner, who became perhaps the most renowned global figure in the discussion regarding self-construction. 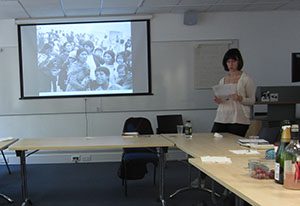 In 1976 the United Nations celebrated its first conference on human settlements in Vancouver, also known as Habitat I. The conference materialised the raising interest that housing held for the UN, and is generally considered ‘the moment when grassroots participation in housing production, through aided self-help, moved to the forefront of the international discussion’ (Kozak 2013:3; my translation). Highly innovative at the time, Habitat I was not only attended by the official delegations but also flooded by thousands of young architects, planners and activists who developed a parallel forum to discuss the problems of accelerated urbanisation. Many of them were members of NGOs in low-income countries, working in shantytowns since the previous decade. Turner was a key figure at the congress, and was in fact organiser of the forum that accompanied it.

A working hypothesis and the role of women

I started this project with a working hypothesis: that for all its inspiration, its agitation and its high profile, Habitat I constituted more a closing moment regarding state engagement with grassroots action than a revitalised new start. I had this in mind in relation to both Peru and Argentina. My reading was that, paradoxically and at the global level, the years after 1976 constituted a general shift toward neoliberalism where grassroots organisations saw their leaderships increasingly demobilised and fragmented. Certainly there was a turn to the right after 1976: in Argentina dramatically with our last dictatorship, Proceso de Reorganización Nacional, and its practices of state terrorism; and in Peru in a different way with the dictatorship of Francisco Morales Bermúdez which ended state interest in pueblos jóvenes and gave way, much more gradually, to neoliberalism. In addition, for Lima specifically, if one looks at the momentum and pace of land invasion and self-construction the main peak is in the 1960s, slowing down after the massive and well-known occupation of Pamplona which resulted in Velasco’s setting of Villa El Salvador.

However, for my hypothesis I hadn’t counted on the overpowering role that women played in these processes, especially in Lima. In fact, the UN conference that did mark a turning point in Peruvian grassroots history was not Habitat I but rather the First UN World Conference on Women (Mexico, 1975). With antecedents in the 1960s and 70s, but gaining momentum in the 1980s, a growing series of low-income women’s groups, events and campaigns took place in Peru whereby pueblos jóvenes organisations played a key role. These started with Mothers’ Clubs, continued with the teachers’ and Mother’s Day 1978/81 demonstrations and the 1982 Women’s Meeting at Puno, before culminating with the creation of local institutions such as the Women’s Federation of Villa El Salvador (FEPOMUVES) led by María Elena Moyano.

Like Domitila Barrios de Chúngara, a key speaker in the UN Women’s conference, the women leading these movements were not necessarily feminist – at least not in the way in which their North American and European counterparts conceptualised it. Key points of contention were, for example, work (a burden rather than a right for low-income women), family planning and the idea of sisterhood. However they were leading Latin American struggles for better living conditions alongside, if not before, men, and as such Domitila discussed women’s role at the conference. Through her voice, and the role of these low-income women, Second Wave feminism started to take a turn globally toward attention to the intertwined dimensions of marginalisation that we nowadays describe as intersectionality. Meanwhile, the relevance of women’s movements in Peru was such that armed group Shining Path saw them as a threat to its own influence and murdered several of them, including Moyano. Their struggles continue, however, and in the present day women’s collectives constitute a key actor in Lima’s shantytowns.

Through my use of the treasure of books and documents in the Canning House Collection at the Maughan Library, I was able to simultaneously expand, support, and challenge my initial assumptions. In other words, my original hypothesis can be said to have been partially verified, but through my use of the collection I discovered a much more complex, and under-studied, set of arrangements that now constitute the key standing point to continue developing this project.

In addition, through my fellowship I could consult other invaluable archives held by London institutions, such as the Latin American collection held at Senate House, the John FC Turner Archive held at the University of Westminster, and the British Library newspapers collections.

I am grateful to Canning House for their warm welcome and for supporting my project; to the Spanish, Portuguese and Latin American Studies department at King’s for their inspirational events as well as the encouraging conversations I had with our colleagues there; and to the librarians and archivists of all the collections I consulted for their assistance and generosity. I regard the writing of low-income communities’ histories as an emerging field at the moment and through this project I endeavour to continue opening it.

The findings of this research will be presented in September.