A joint event with Grupo Atalaya

In just three months of Andrés Manuel López Obrador´s presidency, Mexico´s political landscape has shifted considerably. The country´s 120 million inhabitants makes it an indispensable economy for British companies and investors - which is why Canning House believes it is timely to develop a granular understanding of the opportunities and risks AMLO's presidency holds.

We are joined for this webinar by Gustavo Mohar, Founder and Director General of Grupo Atalya, a private consultancy based in Mexico City specialising in nontechnical risk and strategic intelligence, and an Associate Member of Canning House. 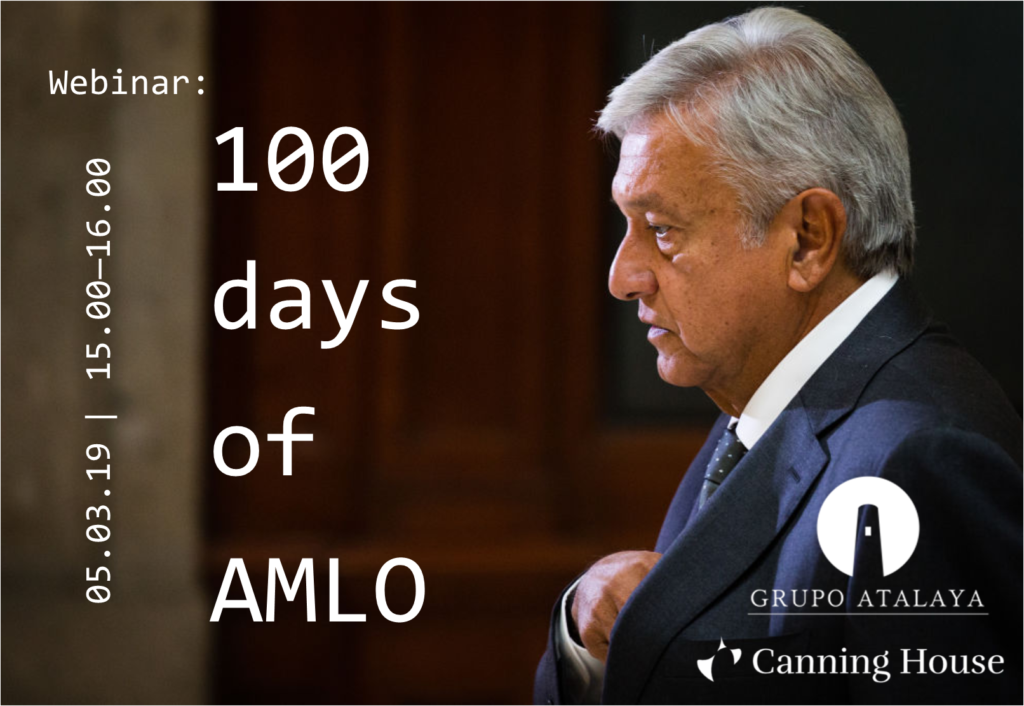 Prior to founding Grupo Atalaya, Mr. Mohar served as Secretary General of Mexico´s National Intelligence Agency (CISEN) where he also worked as director for international affairs.

Mr. Mohar was Mexico’s chief negotiator for migration affairs during the Fox-Bush administrations, leading the Mexican team responsible for reaching agreement on safer, orderly, and legal migration flows between the countries. At the Mexican embassy in Washington, he served as representative of the Ministry of Government, responsible for the migratory agenda, border security, and bilateral cooperation on drug trafficking. He also oversaw Mexico-U.S. political affairs and relations with the U.S. Congress.

Previously, he was Petróleos Mexicanos (PEMEX) representative in Europe and Mexico’s observer to the Organization of the Petroleum Exporting Countries (OPEC).

Since 2001, Mr. Mohar has been involved in Mexico-U.S. efforts to prevent international terrorism and enhance security at the common border. For 10 years, until 2013, he was the representative in Mexico for migratory issues before the Organization for Economic Cooperation and Development (OECD). He has lectured extensively in Mexico and abroad and is currently a board member at the Migration Policy Institute, a think tank based in Washington, D.C. Mr. Mohar holds a law degree from the Universidad Iberoamericana in Mexico.